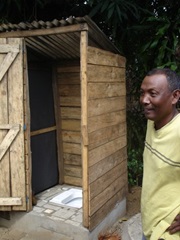 Since 2009, De Watergroep has been collaborating with the Protos NGO on a water and sanitation project in Toamasina, the second city of the African island of Madagascar. Toamasina is situated on the east coast, 250 km of the capital city of Antananarivo, and has 270,000 inhabitants. Only 55,000 have access to the public drinking water system. Toamasina is the main port of Madagascar and therefore an important economic centre.

This project aims to further improve living conditions for the population in three working-class districts. More than three-quarters of the population lives below the poverty line. Less than 20% of the households have minimum sanitary facilities and over 60% get their water from contaminated sources.

In addition, we are working on a public-public partnership between De Watergroep and Jirama, the public company responsible for water supply in the urban agglomerations of Madagascar, with Protos as facilitator.

In the period 2008-2010, three exchange visits took place between De Watergroep and Jirama. This resulted in the development of a knowledge transfer plan to split the distribution network into sections, and then locate leaks, to commercially manage the customer base and to develop a quality control system. An expansion of the water production centre was also identified as a necessary step towards the further development of the distribution network.

In a first phase, 300 families received a clean latrine. A latrine consists of a clean squat toilet with a wooden superstructure, and one or two septic tanks. One school received new latrines, and in three schools the latrines were refurbished and fitted with a hand-wash facility. In addition, investments were made in social mobilisation and education of the population on hygienic behaviour. One of the initiatives was a puppet show, which was performed more than 100 times.

These initiatives were developed further in a second phase: 8,000 people received access to drinking water and 1,000 pupils of the schools in the districts received training on hygiene and sanitation. In addition, the production and distribution capacity of the JIRAMA was analysed and improved. 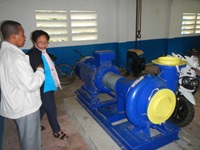 In the period 2013-2015, the partners are working, among other things, on an expansion of the drinking water network and more sanitary facilities. The collaboration between De Watergroep and JIRAMA will further evolve into a public-public partnership.

The project in Toamasina is a collaboration of Protos, De Watergroep and the Flemish Partnership Water for Development.