Development of water supply in Congo

Within the framework of the Flemish Partnership Water for Development, De Watergroep is joining forces with the Join For Water NGO and the Flemish government in a project to improve the supply of drinking water in the Congolese province of Ituri.

35 years of experience in Congo

For over 35 years, the Join For Water NGO has been working with its Congolese partner CIDRI on the development of drinking water and sanitation facilities in Ituri Province in eastern Congo. It will cover the construction of 13 drinking water systems that supply half a million people. That’s still only 1 in 9 people in Ituri. The management is in the hands of drinking water committees composed of members of the population. With the help of CIDRI, they manage to keep the infrastructure running, but there is still room for improvement.

In Congo, a large number of state institutions are theoretically involved in water management. A new water law was adopted in 2015, providing a legal framework for the reform of the water sector. Water management was a state monopoly before 2014. The new law also allows for management by the local community.

In 2018, a second-line structure was set up and legally recognised, the Structure d’Appui àla Gestion de l’Eau (SAGE), which will provide technical and management support to the member management committee. SAGE represents the management committee and promotes the interests of water users.

Waiting at the water taps 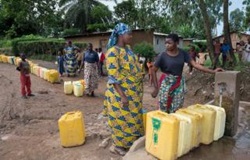 The drinking water systems that were built approximately 20 years ago have become far too small in the meantime due to the increased population. This results in long queues for the public water taps that only open in the morning and evening. With these projects, we want to give more inhabitants access to drinking water by developing the drinking water sector in Congo in an efficient, equitable, and sustainable way. And that’s where the knowledge and expertise of De Watergroep comes in handy. In addition to financial resources, De Watergroep also offers technical support.